“A picture is worth a thousand words.” Much of my work has been visual and has been recorded in photographs and movies. In the 1970s this was done on 35mm film for photos which involved endless developing and printing. Subsequently the 15mm cine film and then VHS video was the method of choice to collect photographic data and then digital imaging arrived. Numerical simulation has now also opened the door to wonderful computer graphics. All this has happened in my lifetime! 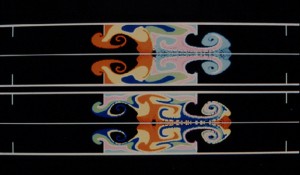 This Oscillatory Flow Mixing (OFM) simulation was created by Tony Howes in the 1980s “Pioneering days” of computer simulation. Tony’s work was, and still is a masterpiece that is very beautiful. 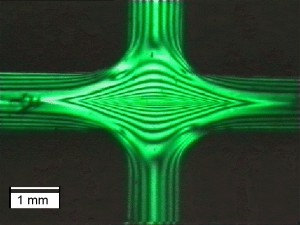 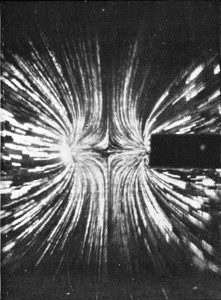 This is one of my favourites. I was doing my PhD at Bristol in 1970 and taking flow visualisation 35mm film photos of this twin jet extensional flow geometry. Endless developing of 35mm film to “see” if the photo was in focus, the exposure time right and that I had “captured” a flow viz particle at the central stagnation point. The jets are 1mm in diameter and the flow is into the jets. The extensional stretching rate at the centre of symmetry is in the thousands of reciprocal seconds. I believe this photo is unique, even today! 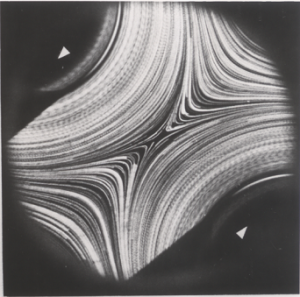 This is another 1970s stagnation point flow visualisation photo taken using a “Two roll mill” apparatus. After obtaining my PhD I had a Post Doc period at Bristol where I was able to develop different stagnation point extensional flow apparatus that were skilfully made for me by the Physics Department workshops. 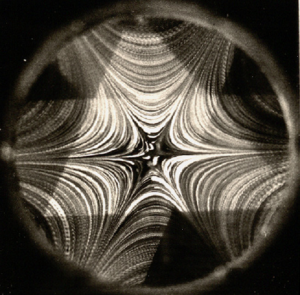 1976 was my final year at Bristol and marked the end of one of my most creative periods of work. There was a tea room discussion about how many flow lines could converge to a point and Michael Berry (now Sir Michael) came up with the “Cusp of the elliptic umbilic” mathematical formula from the then exciting “Catastrophe Theory” period of work from Christopher Zeeman. The Bristol Department workshop then built me a “Six Roll Mill” and I had a challenging but rewarding time collecting flow patterns from this geometry. The above photo was taken when all the six roller speeds were the same. A photo that will live with me forever!

The Multipass Rheometer (MPR) was a bit of a beast to operate, but it created great (and unique) flow birefringence photos. This one is of a polyethylene melt flowing within and out of a smooth constriction slot. The dark “extinction bands” correspond to different stress levels in the melt. 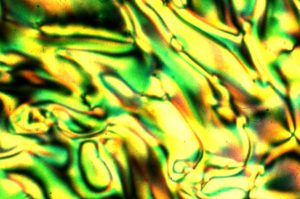 Thermotropic liquid crystal polymers when viewed in a microscope between crossed polars in the melt are both colourful and interesting. The bright colours correspond to local molecular orientation and the dark lines are disclination defects that pervade the whole material, just as line dislocation defects are in metals and most crystals.